A new version (1.2.1) of the Java Machine Learning platform KeLP developed within the SAG group has been released.

In this releases, the code for learning relations between pairs of short texts has been introduced, including the approach described in:

In particular this new release includes:

Check out this new version from our repositories. API Javadoc is already available. Your suggestions will be very precious for us, so download and try KeLP 1.2.1! 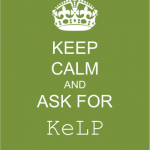